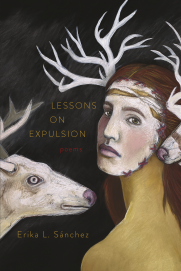 Note: My intermediate poetry class is wrapping up their discussion of Erika L. Sánchez’s Lessons on Expulsion. All three of these poems appear in the final section of the book, and they model two approaches of the  “function” of a poem. In the first exercise, students will list humiliations and embarrassments in a move toward candor and intimacy, and, in the second, they will think about the rhetoric of the imperative, its insistence and (sometimes) hesitance.

10/19 Writing Exercises: “Poem of My Humiliations” and “Admit It”

We will do two back-to-back writing exercises based on three poems by Erika L. Sánchez—“Poem of My Humiliations” for the first, and “Circles” and “Six Months after Contemplating Suicide” for the second—if time allows.

Writing Exercise #1: “Poem of My Humiliations”