The following information comes directly from my Spring 2017 syllabus for ENG 2091: Literature to Film.

ENG 2091 Literature to Film Required Texts
You have five required texts for this course, which we will read prior to viewing their film adaptations.

We will also read select essays and excerpts about the history, craft, and theory of film, available to you on Moodle.

A Note About Ordering Books
If you choose not to order from the university bookstore, I encourage you to consider ordering books directly from the publisher. Cutting out the middleman helps ensure that publishers and authors are treated fairly in the transaction. You can also make a difference with your book purchase by placing a special order with a local or regional bookstore, like Labyrinth Books in Princeton or Black Dog Books in Newton; an independent bookstore with online ordering, like Powell’s or Strand Bookstore; or a philanthropic independent seller like Better World Books.

Reserve Texts at Taylor Memorial Library
All of our literary and cinematic texts are available, sometimes in other editions, through Course Reserves at Taylor Memorial Library, except for The Handmaid’s Tale (1990) film and The Handmaid’s Tale (2017) television series. In order to access these materials, go to the main desk in the library and request to use them in the library.

Cinematic Texts
We will screen the five feature-length films in class, and several other Lit to Film adaptations: 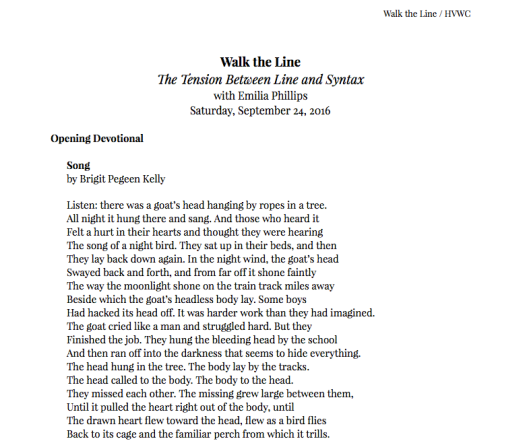 With the fall semester starting at Virginia Commonwealth University this week, I have started to think about some new writing and reading exercises for my students. As these exercises will relate with our course goals and readings, I thought I would share my course descriptions and reading lists for my two classes, English 215: Textual Analysis and English 305: Writing Poetry.

Course Description
“The Captive Body, The Body Captivating”—In order to investigate the means by which writers have control over textual bodies, we will examine a century’s worth of narratives about individuals’ control, or lack thereof, over their physical bodies. Beginning with Franz Kafka’s The Metamorphosis (1915) and working our way toward Leslie Jamison’s The Empathy Exams: Essays (2014), we will explore through class discussion and written assignments the relationships between identity, form, and point of view. In doing so, students will hone their abilities as close readers and critical thinkers, analyzing the writers’ choices in presenting these narratives and their effects on the reader, as well as the historical significance of each text and its consequence in today’s debates about individuals’ rights over their own bodies. In addition to the following primary texts, we will also read criticism that reflects a diverse approach to these issues, including new criticism, feminist and queer theory.

American poet C.D. Wright once wrote: “If I wanted to understand a culture, my own for instance . . . I would turn to poetry first. For it is my confirmed bias that the poets remain the most ‘stunned by existence,’ the most determined to redeem the world in words.” In this course, we will hold poetry to this noble standard, as an amplifier for the voices in our culture and an invocatory rendering of our world. In doing so, I’ll ask you to not only read and write poetry but begin to look at your surroundings as a poet would. This requires close examination of images, scrutiny of your thoughts and feelings about subject matter, and consideration for other points of view. Additionally, you will be asked to think deeply about language, in terms of its meanings, its sounds, and its rhythms. You should bring to this class a hard work ethic supported by curiosity and generosity. As a means of introduction to the craft of poetry, students will submit original poems for workshop, a collaborative discussion about writing techniques and their effects on readers. In addition to workshop, you will be asked to engage with the writing of contemporary poets, to read like a writer would. I’ve chosen seven contemporary poetry collections and Poetry magazine so that you will have a lens through which to examine the current landscape of American poetry and to see that even today poets are still trying to “redeem the world in words.”